Corporal 4102 Thomas McCaskie served with the 1st/5th Battalion, Kings Own Scottish Borderers.  He was born on 13/2/1890 at Dunragit Lodge, Old Luce, the son of Margaret and Thomas McCaskie. The family lived at 4 High Vennel in Wigtown before the war and Thomas was employed as a clerk at Bladnoch Creamery as well as playing football for Wigtown Utd. He enlisted with the KOSB at Wigtown. 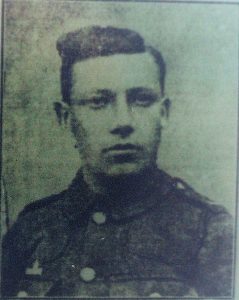 On 24 May the Battalion sailed from Liverpool for service at Gallipoli, landing there on 6th June. At some time during the campaign Thomas fell ill and was evacuated back to Britain where he was treated at the Royal Victoria Hospital at Netley, near Southampton. Some 50,000 patients were treated at Netley during the war. Sadly, Thomas did not survive, dying on 7 November 1915. His body was brought back to Wigtown where he is buried in the cemetery.

On 30 November 1915 the Galloway Gazette reported:

Great regret was felt throughout Wigtown and district this week when word was received that Corporal Thomas McCaskie of the 1/5th KOSB had died at Netley Hospital on Sunday. He had been to the Front, and it is understood that he was suffering from dysentery. Corporal McCaskie, prior to mobilisation, was a clerk at the Creamery, Bladnoch, and was a great favourite of the district. He was about twenty five years of age. The funeral took place on Thursday, and was very largely attended, among those present being several of Corporal McCaskie’s comrades who are at present invalided home from the Dardanelles. The remains were accompanied to Wigtown Cemetery by the Town Band playing the Dead March from “Saul”. The utmost sympathy is felt for the bereaved parents and family. As a mark of respect all places of business were closed during the funeral service.

Thomas McCaskie’s grave can be seen in Wigtown High Cemetery. His brother, David, is also commemorated on the gravestone. David was killed in action in France in April 1918. 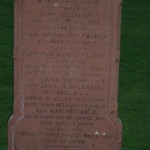 A good number of Wigtown soldiers fought at Gallipoli, one of the British army’s greatest disasters. Brilliant in concept it turned into a classic example of muddle and miscalculation. Of the 489,000 Allied soldiers involved, just over half became casualties, many from disease. Although British, Australian, New Zealand and French troops managed to land the troops failed to penetrate inland and were pinned down on the beaches by resolute Turkish defence. The troops showed outstanding courage and were to be later withdrawn.